A panoramic shot on the Utah drive

My first rule of vacation planning is have only the shell of a plan – nothing must be cast in stone, there must be no itinerary or set course of events, simply because go-with-the-flow plans are wayyyyyy more fun and give birth to the best travel stories.

I have been on quite a few road trips in my lifetime, but this one was the first without an actual destination – thus the framework was made up as the journey progressed.  Through fifteen states and six thousand, two hundred and ten miles later, it turned out to be the most productive, hassle-free, exhilarating, most fun and best vacation I have ever had!

I have so many things to write, so many things to share, say and re-live, that days later I found myself drenched in a downpour of thoughts and words and just didn’t know where to start. Definitely not going to be a chronological recount, even though I took enough travel notes during my trip to be able to add a detailed timeline – hey, the trip had no structure, why should the blog post?

Among the most memorable moments this trip were: overnight camping in Yellowstone National Park where the temperature dropped from a sweltering 102F (39C) at midday to a freezing 28F (-2C) at midnight; seeing my first grizzly bear in Wyoming (saw two in fact); taking in the music of my favourite band Dave Matthews in Colorado (and yes that location is legally significant); watching and capturing a lightning storm over the desert right after sunset in Arches National Park and disturbing the peace in lazy Nebraska with Nirvana (I will have to withhold the details of this shenanigan so that I may not usurp the angelic image you have of me, wink wink). 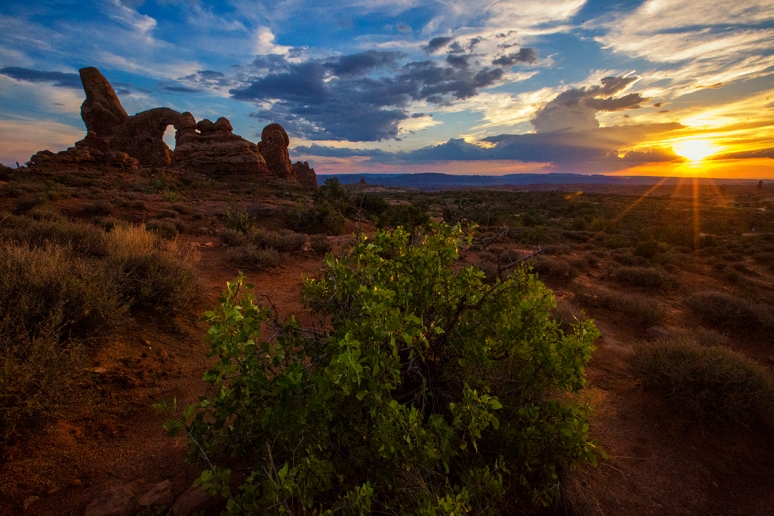 Out of the fifteen states I touched on during this trip, I must say that Wyoming was by far by favourite.  The expansive, scenic prairies, abundant wildlife; outstanding (and environmentally friendly) welcome centre and rest stops; home to America’s first National Park (Yellowstone) and lastly the preservation of a timeline and lifestyle.  My mother has travelled to Canada but she has never been to the United States and if she went to Wyoming first, it would fulfill her expectations of what she thinks the U.S. to be – like she walked on the studio set of her favourite 70s western show, Bonanza.

The American heartland seemed all very similar to the eyes of this outsider, people living off the land – acres and acres of corn, soy and sunflower; fields of grazing cattle, homes styled with barns and silos dotted miles apart and surrounded by non-obtrusive but definitive farm fencing.  Though this scene seemed to repeat itself in several states, it never became monotonous since each place added its own flavour.

Moab in Utah was probably my favourite town – south of Arches National Park, nestled in the heart of sandstone country, not to mention getting there is via a mandatory awe inspiring drive through giant mountainous red rock formations – what’s not to love?  The town itself is quaint and touristy, but in a more authentic way that many other tourist spots I’ve visited.  The best part of course is that it’s only a few miles away from the National Park which allowed this photographer easier access to late evening and early morning light, eliminating daunting long drives back to accommodation after a long day of park exploration.

That just reminded me of another great moment when leaving the park after an amazing sunset and earlier referenced lightning storm – parked on a cliff flanked by a huge wall of sandstone, with silhouettes of magnificent eroded monoliths at Arches, sitting on the floor outside the car, under a moon hanging so low, you felt that if you stood up and stretched a little further you might be able to touch it somehow … the kind of moon that makes you feel safe enough to howl at …uninhibited.